We are still offering our overflow areas and and parking lot option (FM 91.3) for worship. We look forward to worshipping with you!

1 Peter 2:9,10
I. The Requirement of the Priesthood (10-11)
A. The Access - the Cross of Christ (John 19:17-20 - Jesus carried His cross outside the city)
B. The Absent - those without Christ
C. The Availabilty - no longer separated, no earning grace ... Comes through Christ
II. The Reproach of the Priesthood (12-13; Deuteronomy 21:22-23)
A. Christ Suffered and Endured Reproach (we identify with Jesus in our salvation and life)
B. Christians Go to Him (leaving the system and identify with Jesus)
III. The Reward of the Priesthood (14)
A. Now - no lasting city
B. Then - the city to come (permanent) (Hebrews 12:22-24; Philippians 3:20-21)
IV. The Regular Offerings of the Priesthood (15-16)
A. Words of Confession (acknowledge, saying the same thing, affirming the character of God)
B. Works of Grace (doing good to others)

Next Steps:
> Faithfully, daily, proclaim the excellencies of Him who called you.
How do we proclaim Him?
1. Run to the cross!

"Once I was talking to a man who had just about given up hope that there was anything God could do about his life. The logevity of his struggles and the depth of his sin and deception were that overwhelming. At one time, in the midst of our weekly time together, I spoke with him about this idea of running to the throne of grace in the midst of temptation or running to the crossduring his time of deepest need--even in the midst of his sinful activity or after a failure. His response was pretty frank. He said, 'Running to the cross--now that's a novel idea. I don't know much about that. I only know how to slink back to the cross...slink back to God after I've put enough space between me and my last acting-out thing and gathered the courage to deal with God again. I've been slinking back for as long as I can remember.' Man, was he honest! This is where so many men live. In fact, I'd be surprised if you were reading this and couldn't truthfully say, 'Yeah. That's me.'"
~John Freeman, Hide or Seek pg 86.

2. Pursue the knowledge of God! (Read the Word & recommended reading list)
3. Make it your ambition to please God! 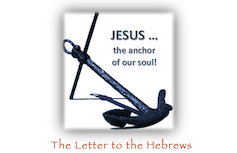 More in Jesus...the anchor of our soul!

Worship through the Reading & Hearing of God's Word